All over our nation we have gun free zones. These target rich environments have proven worthless when some lunatic wants to cause bodily harm to others and to make themselves a household name. Why haven’t they worked as many think they should? Well the answer is pretty simple yet many fail to under 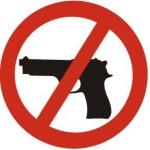 stand, which is probably why we still have them. The simple explanation is bad people do not follow the laws and they sure the hell don’t pay attention to a little sign. There you have it! It’s a short one sentence explanation that seems to confuse so many. Why is this? Well there’s a simple explanation for that one as well and again it’s one short sentence. They have their heads up their ass! Again, nothing confusing here just the simple truth. When we were kids we used to play and imagine we had imaginary force fields around us, much like these gun free zones. Unfortunately they didn’t work then and they definitely don’t work today. Go ahead and give it a try if you don’t believe me. Imagine really hard that you have a protective force field around your entire body. You must think really hard or it won’t work. Once your mentally ready run really, really fast into a brick wall. Did it protect you?

The same principles and logic can be applied to gun-control as a whole. Why doesn’t gun-control work to stop or at least prevent random acts of violence? It’s because bad people do not follow the laws. If they don’t follow the laws why do we have them? Well that’s another good question and the answer is (you guessed it) simple. We have laws so when laws are broken the person responsible for breaking that law is punished accordingly. If we did not have bad people we would not need laws, but that’s not the case and I don’t see it happening anytime soon. So while the gun grabbers are out there making up their own statistics to agree with their agenda we’re stuck writing rants that defend our god given rights. It’s an endless circle. A bad person harms or kills someone, the gun grabbers instantly jump on the guns are evil bandwagon and you and I are shaking our heads trying to find the connection. It will never change and because we can’t fix stupid we’re locked into this endless cycle.

It’s not difficult to discredit and prove without a doubt that gun-control in all its forms is flawed. This doesn’t even take into consideration that it’s a right we’ve had for over 200 years. So how can they even attempt to pass gun-control laws when our Bill of Rights state without question that we have the right to be armed and this right shall not be infringed? Yes, it’s still unclear as to which part of that is confusing. Let me point out that “Armed” doesn’t mean firearms, it means we can be armed with anything that makes us feel secure and protected. Whether that be a knife, sword, gun, cannon or even an effing tank. And if you happen to own an effing tank I’m jealous! If you have the means to buy a tank so be it. Although it may be difficult to slide that puppy into your pocket or purse, and parallel parking it would be a bitch. Being armed is a right and we’ve cleared up the confusion of the word ARMED. Then we have “Shall not be infringed”. I think that is clearly understandable and no explanation is needed, even for our liberal readers out there.
So gun-control benefits the criminals and mentally unstable while turning a complete populace into defenseless targets, Wow! We have managed to discredit all the myths about gun free zones and gun-control! I feel much better and now on to world peace.

As I rant about the complete and utter stupidity of our mindless liberal friends I must point out that our society, way of life and freedoms are close to extinction. If we continue down this path and do nothing to stop the liberal pandemic that threatens our nation, our children and their children will not know what freedom is. Laws no matter how well they are written or how logical they seem will never prevent people from making the wrong decision.