The purpose of the article is to give you a condensed but fact filled overview of why our Founding Fathers included the Second Amendment in our Constitution. It’s fairly long but if you don’t now the history it’s a good read.

A storm is building off the horizon and will be upon us before we realize it. The storm has been building strength for years as our rights as Americans have been under attack by our elected officials. The only thing protecting these rights have been a couple pieces of old paper known as the Constitution of the United States. It was drafted in 1787 and ratified by the states in 1788, it was then followed by the first ten amendments, otherwise known as The Bill of Rights in 1791. One would think these documents which govern our nation would be held to the highest level of regard but as we know, they are not. If the laws they contained were as protected as the National Archive protects the actual documents we’d be in good shape.

Drafting these documents was not an easy task and many hurdles threatened the successful completion of the Constitution of the United States. How they actually completed the task they set out to do is a miracle and a story we’ll cover later. 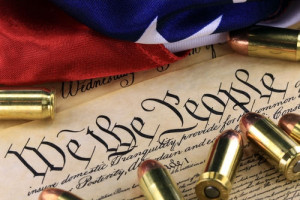 The Second Amendment is the thorn in the side of tyranny. It’s meaning has been debated, twisted and misinterpreted for years and will be for years to come if we do not remove the traitorous scum who threaten it. Why it’s debated is a long story of control, tyranny and power. The British did not want our early colonialist to have arms. In fact they attempted to confiscate them. The British loved taxes, much like our current government does. The colonialist were weary of taxes, just as we are. As a result of taxes and tariffs the colonialist started talking, planning and that of course led to the Revolution. You may think you know the story from here but I doubt it. We study history in our schools but much of the story has been truncated, twisted and is made up. It has morphed into a fictional tale.

The people that fought in the revolution were farmers, merchants, business men. They were a militia, a group of non-professional fighters, citizens of the state they resided in. The British of course had a strong and powerful Standing Army. The most powerful army on the face of the planet. Yet a group of ordinary citizens, known as the militia banded together for a cause, a purpose and an end goal. That goal was freedom from a tyrannical government set on taxing the colonialists into extinction.

We all know the outcome of the war so we will move on to the years following. From 1781 to 1787 the law of the land was governed by a document known as the Articles of Confederation. These articles were actually drafted in 1777 but we’re not ratified by the states until 1781. The years after the war were tough, our economy was in ruin, the United States had massive debt as a result of the war. Each state was printing its own paper money, inflation was through the roof. The states were not working together and in fact they were working against each other. It was not a great time to be an American. As a result of these dark times a group of individuals wanted to make changes. Change is a difficult beast and is fought against with passion, yet in 1787 twelve of thirteen states got together to discuss and draft what we now know as the Constitution of the United States. They called this meeting the Constitutional Convention and 55 state delegates from twelve states gathered in Pennsylvania for four months. Rhode Island boycotted the Convention because the first draft did not include a Bill of Rights.

You may remember the revolution was a war between a militia and a standing army. A standing army was debated during the Convention of 1787 but the thought of a standing army controlled by a central government did not sit well with the states. George Washington was a strong supporter of a standing army which he continued to push during his Presidency. Needless to say a standing army controlled by a government and could be used against the states did not gain much support. They then discussed the states militia which is composed of able bodied men of the states. Part of this discussion suggested the government could supply and equip these men with arms in the event they were called upon again. On the surface this sounded like a reasonable responsibility of the government until they realized a government could withhold needed arms in times of tyrannical rule. After much discussion and debate the states could not support this recommendation and it become another side note of history. The fear of a powerful central government was in fact a major obstacle when drafting the Constitution. The states did not want anything to do with a central government and therefore wrote into the Constitution specific guidelines and limitation on the power the government would have. During the Convention, the lack of a Bill of Rights, which would further limit the powers of a central government continued to side track the debate but by some miracle the Convention continued. It must be mentioned that our Constitution had many roadblocks. We had issues with equal representation of the states, how the government would function, and even how many Executors would run the government. Yes, there were some that wanted multiple presidents so one person did not have a tyrannical hold on the government. It was decided that Congress would hold the power and the President would only uphold the laws of the Constitution. Yet with all the road blocks it managed to continue and finally complete.

Knowing these facts we can take another look at our Second Amendment as it was envisioned by our Founding Fathers.

A well regulated Militia, being necessary to the security of a free State, the right of the people to keep and bear Arms, shall not be infringed.

Knowing history and knowing what our Founding Fathers wanted in a limited government puts the Constitution and the Bill of Rights in a new light. It is unquestionable what the Second Amendment means. Anyone in a position of power will have the urge from time to time to abuse their power. We know it and our Founding Fathers knew it. When we start questioning the meaning of the Constitution and Bill of Rights we dishonor the men and woman who have died protecting it. If you have taken an oath to support and defend the Constitution of the United States against enemies foreign and domestic you must, without question honor that oath. If you do not, you are in fact an enemy of the United States of America.

4 thoughts on “History of the Second Amendment”