Did you know there were actually two Boston Tea Parties?  The first and most famous took place in 1773 by the Sons of Liberty.  The second came a year later in 1774 by common colonialists. 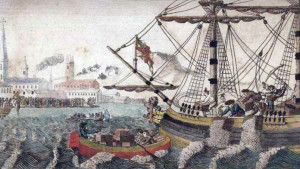 Molon Labe or “come and take them” was reportedly the response King Leonidas gave the Persian army when they demanded they lay down their weapons during the battle of Thermopylae in 480 BC. Since then several variations of the defiant expression have been used throughout history.

American patriots used “come and take it” during the American Revolutionary War.

Defiant Texans used  “come and take it” during the Texas Revolution.

The short but powerful phrase  has become the most popular call of defiance with Second Amendment activists throughout our nation.

Did You Know?
George Washington was the first American Intelligence Chief. He has received far less attention as America’s first Intelligence Chief than his numerous exploits as a military and political leader. Yet, without his skillful management of American intelligence activities, the course of the Revolutionary War could have been quite different. 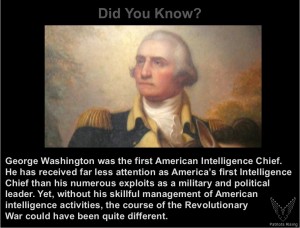 Did You Know?
Civil Disobedience is the refusal to obey certain laws of a government as a means of passive resistance because of one’s moral conviction or belief. 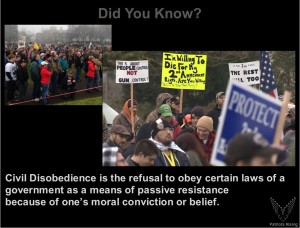 Did you Know?
The United States Constitution which is the supreme law of the land set out to create a Republic which is a government by the people and for the people. Supreme power is vested in the people and exercised directly by them or by their elected officials.

Separation of Powers is a system in which our three branches of the government would have defined abilities to check the powers of the other branches.  The three branches are:

This philosophy heavily influenced the writing of the United States Constitution in which each of the branches are to be kept in distinct order to prevent an abuse of power. 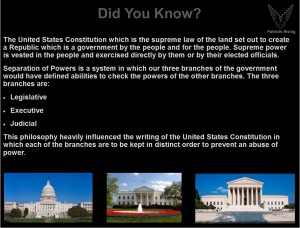 Did You Know?
The first shots of the American Revolution were fired at Lexington, Massachusetts in April 1775 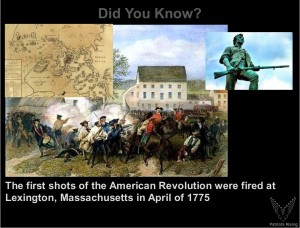 Did You Know?
Unalienable rights are rights that cannot be given up, taken away, or transferred. Life, liberty and the pursuit of happiness, are some of these rights. 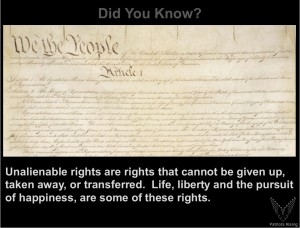