The year was 1933 and Nazism had taken control over Germany.  In an act of state censorship the Office for Press and Propaganda of the German Student Union proclaimed a nationwide “Action against the Un-German Spirit”.  On May 10, 1933, over 25,000 volumes of books deemed offensive to Nazism were burned.  It is now considered one of our darkest hours in world history.

The year was 2015 and liberalism had taken control over the United States.  In an act of state censorship the Confederate flag was removed and banned across the country.  Citizens in a state of mass hysteria called for the removal and destruction of monuments, images and even television shows that feature the offensive image.  When the taste of victory hit the liberal mob, cries to ban the national flag of the United State could be heard.  The mob fueled by the mainstream media fed into the mass hysteria and at this time the end is no where in sight.  How will future generation look upon this act of censorship?

On this road trip of insanity, we must follow through to make sure we remove all references to all things that offend.  Why stop at the Confederate flag and Civil War monuments?  Let’s ban all images of George Washington, he owned slaves.  As a matter of fact, most of our founding fathers owned slaves.  What about the crimes against the Native Americans?  What about the Japanese-American citizens we placed in internment camps?  Where do you stop?
History is filled with good and bad and it can’t be changed or censored!  Any and all corporations, politicians and media outlets that have supported this witch hunt are disgraceful!! 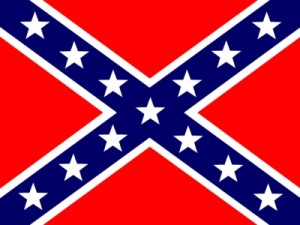 CONFEDERATE FLAG
Before the political correct crowd blows a gasket over the confederate flag (to late) we must point out that it does not mean what they think it means!  The confederate flag does not represent slavery, repression, hatred or white supremacy.  Take a close look at the flag and you will see red, white and blue.  Yep, just like the American flag.  You will also notice 13 stars, this represents the first thirteen colonies.
Removing the flag and renaming anything and everything with a reference to the Civil War will not change a damn thing.  The Civil War was not started over slavery, that came later.  Liberal’s love rewriting history and they have a monopoly on it.  They control the journalists, schools and text books.  You cannot change history based on a symbol you find offensive.  Recently a statue in Baltimore was defaced because it honors soldiers of the Civil War.
The political correct police also want to rename items with Confederate names like streets, rivers and lakes.  Please stop sniffing the glue!  Do you realize the people that preach racism are generally the biggest racists?
Facts About the Confederate Flag
The meaning behind the Confederate Flag